What a wonderful day to be competing a week before my debut for GB. First started off with a quick leg stretch at Northala parkrun before heading to the relays.  With the kids being at their nan’s it relied on us also taking the dogs so Alex jogged round the route with them whilst I ran at the front.  18:06 and a forth place, first lady which I was pleased with in windy conditions.
Then onto a trip to Reigate for Belgrave Belle’s race.  Though as part of the ‘A’ team we ca,e first, just as importantly we were supported by two other teams who finished in 5th and 14th out of a total of 43 who finished the race.
Belles ‘A’ team have now won this competition every year since returning in 2014 after a gap of several years. Interestingly, eight different runners have been members of the three winning teams and my debut.
Brilliantly organised and marshalled on a testing and spectator friendly tough cross country course, immediate results, all in the beautiful setting of the Priory Park with the backdrop of hills and Autumn colours. I loved it !
With men and women starting together, there was the need for sensible cool heads on the first leg. There is no one more sensible than Sam who led the A team but was pitted against the strongest runners of the day from Crawley and Epsom who both front loaded their teams. Helen, who had been under the weather all week and Fiona both tackled the initial hill with caution and gave their teams the ideal start.
Becky, fresh from an outstanding relay leg at the Scrubs and a PB for 10km in the last two weeks was a little nervous about taking over from me after placing us in third place. ‘I hope they don’t all come past me’. She needn’t have worried, it wasn’t long before Becky overtook the two leading teams handing over with a commanding lead.  So it was left to Zoe, like last year to bring the honours home for our A team, not easy running a solo time trial, but she ran a terrific last leg exactly equalling my time for the third fastest of the day. 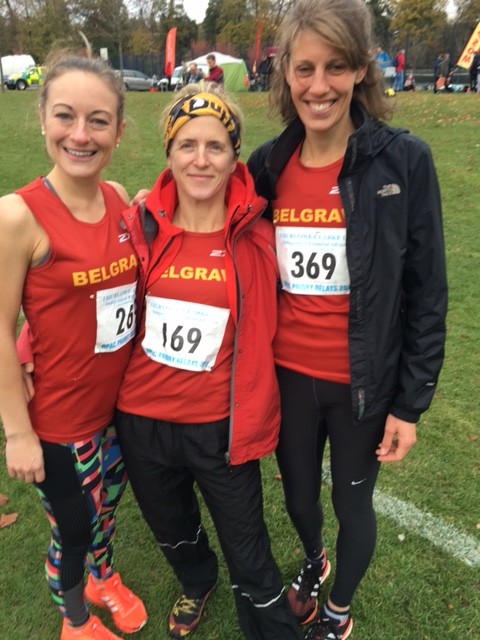