My running journey has been a slow-burner and something that started out as a small challenge until I realised my full potential.

I am fortunate enough to have met some wonderful people along the way that helped me to recognise that I have some natural ability to achieve some great achievements in running. All these people, including family, friends and relationships, have supported me during both the good and the bad times, with many now becoming friends for life. In particular towards the end of 2009, I lost my husband and left with the reality of trying to cope with my 2 beautiful children, at the time Emily was only 7 and Spencer 13mths old. All I can say is the shock and pain of the death put me into a position of despair, only to realise life must carry on and through my support network was able to get back into some normality.

Over the years I have realised to be a great runner and to get where I am today it has taken a lot of hard work, dedication, and commitment. To make the leap to the next level as an elite athlete takes even more of this; it takes true determination and guts to get up and train religiously everyday whatever the weather, time of day (sometimes earlier than 5 am), circumstances or obstacle that meets your path. To have a goal and see this being realised is the biggest reward one could wish for.

Some have described me as inspirational; for me, it’s that I have found an “Equilibrium”, a way to balance my home life, full-time work, school coaching, and also my own training although most of the time I run on adrenaline and tired!

There is also the saying “it’s all about what happens on the day,” and this is very true because a lot of the time I run purely on emotions. All I can say is many great things happen to you when you run; it’s that sense and feeling of being free and the ability to share those special moments with others.

For me, helping others to reach their goals continues to be a very positive experience. This focus for me alongside my own training has involved me in the past for 4 years coaching adults and qualifying as a “coaching assistant” with UKA, and the last 9 years running the Cross County club and helping organise league races for my children’s then primary school in Marlow.  Now in 2018 my daughter has finished secondary school and proud to say passed her GCSE’s with great grades  the focus is now for her to start an agricultural college and my son to finish his last year of primary school.  We chose to move in December to Oxford wanting a fresh start, new challenges and more importantly new running routes to explore.

Where did my running journey start?

I have always enjoyed being fit even when I was at Great Marlow School I had enjoyed a range of sports, especially cross country which I regularly attended and won the local league and attended country sports track and field representing the school. However, I was never really encouraged to take this further and after leaving school maintained fitness at the gym. It was not until 2005 that I started running seriously in between the birth of my two children, Emily & Spencer. I was pursued by some work colleagues to take part in the Reading Half marathon and the London Marathon to help raise money for the Outward Bound charity. It was at this point for the first time that I really got into distance running. I ran 3:16:01 in London just missing out on automatic qualification to enter the London Marathon the following year. I found I had a natural aptitude for distance running, which other more experienced runners recognised even before I did! This was where the addictive bug started.

It was at this point for the first time that I really got into distance running. I ran 3:16:01 in London just missing out on automatic qualification to enter the London Marathon the following year. I found I had a natural aptitude for distance running, which other more experienced runners recognised even before I did! This was where the addictive bug started.

What did I do about it?  Well, I joined a local running club (Handy Cross Runners) in early 2005 to help with my training after meeting a few of them in the local gym. Many thanks to my now long term friends Trevor and Phil for taking me under their wing and all those hours put in for our long training runs! In 2008 I then met my now best pal Jo Smith at the gym through an introduction and we have since become the best of friends and shared many crazy runs in torturous conditions (rain, snow, ice, you name it). Running lets you put the world to rights and with Jo this is so very true. I will always find time to run with Jo to help keep me sane and picks me up on a low day. Since then also meet some other wonderful people like John from the same group of friends and some other amazing stories to share. What I love about running is the ability to run and talk through issues and updates out in the open.

In 2009 I ran a sub-3hr marathon for the first time (2:49 in London) and was approached in late 2009 after Marlow half marathon by a local running coach, Matt Whiting who was keen to train me. I also chose to advance to a higher ranking club, Belgrave Harriers to provide me more opportunities for higher profile races. I still keep in contact with my friends at Handy Cross and see many regulars when helping at local races, prepare and also compete in these races.

Belgrave have been for my club for the last 7 years, they are also still expanding their women’s distance team. Already the women’s team for Virgin London Marathon 2011 won the silver medal with me being positioned in the highest rank as 3rd lady in the mass field and 8th UK lady overall this continued onto winning in 2012 and 2013 the Gold at London. I am still a very active as a Belgravian in as many races I can support the club with, and help maintain the website. I have and continue to have great support from team manager Will Cockerell, and now Charlie Dickinson.

I have now been able to establish myself as one of England’s marathon runners, It’s hard to believe I could have even got this far and progress to an international level.   My first opportunity came in September 2010 when I represented South England in the inter-counties Cardiff 10k. In October 2010 I improved my marathon best in Amsterdam to finish overall 11th lady (1st British female) in a time of 2hrs 42.51 secs which

In October 2010 I improved my marathon best in Amsterdam to finish overall 11th lady (1st British female) in a time of 2hrs 42.51 secs which is my quickest yet. This progress of PB’s has continued into 2011 with a new personal best of 77mins 43 secs in Barcelona Half marathon and of course and previously mentioned finishing 3rd lady in the mass field of Virgin London Marathon. Since London, many of my other races have won the ladies race and increased my marathon time to 2hrs 42.11 and now a half at 77:09 and since moved onto ultra-distance races.

In June 2011 made a conscious decision in order to improve looked for a coach to continue working with and therefore on recommendation approached Rodger Hughes (Windsor, Hounslow, Slough and Eton athletics club) a qualified coach and still with him.

Training over the years haven’t been without many up’s and downs, injury needing surgery in 2013, achillies and foot issues but pleased to say still running strong.

This last 18 months having been about ultra-distance after my first taste running the Ridgeway multi-day race in 2011 and a course record I was ready to start the new distance. The first being a non-stop race called Country to Capital 45 miles in 5hrs 36 and a course record. Then onto a key race Thames Path 100 miler which was my biggest challenge with the back part of the race in the dark (5.5 hrs) but finished with a great course Record in 16:00.9 seconds ( multi-terrain) 1st lady /second overall.

Having approached the GB team about the trail and due to missing the qualifier realised I needed to race something more technical. As time wasn’t on my side and to prove my ability went back to the road and ran the Energizer 100k (Trial course for the World 24hr in 2017) in 8hrs 9mins, 1st Lady ( solo run) on a 1-mile loop (multi-terrain). This was the fastest time for 100k that year but sadly with new standards fell short of the team competition of 8:00 dead, truly feel as this was done on tired and the week before winning a trail half that this was more for the experience.

The best thing came however when approached for the 50k by the chairman to confirm I had been successfully selected for the 50k GB. Much to my delight, this did, however, change my plans.   Under the guidance of the selection team that I couldn’t run Berlin as PB potential due to being close to the Doha race. So on advice and discussion and needing a long race ahead of the event opted for the Isle of Mann Marathon in August as a warm up to the 50k in Doha with a course record and winning the masters. Then onto the most important race as my first (hopefully not last) Great Britain vest in November in Doha, for 50k we completed this in 3hrs 35mins . 3rd scorer for the team and 7th in the World and for the management one of their most successful championships with a Gold from our ladies team and silver from the men. Despite a few other races towards the end in December and a heavy year of racing, I topped it off with a  challenging hilly 50 mile race consisting of 5 x 10 miles in Wendover woods with a first place and course record.  Not bad on a course with 9500ft worth of climb!

My highlight for 2016 has to be the opportunity to represent my country and pleased to have made the selection.   2017  was a very challenging year with glandular fever and most of my main races ended up as a DNF due to fever and being too weak.  A year I want to forget, so here is to hopefully a more successful 2018 !

Finally a start to a better year and kicked off with a cracking January PB for a hilly  & multi-lap 50k.   This still stands in September as the leading British time for the distance along with my 100k.  Also ranks me 10th in the ” All time ” list, something I am keen to move up in the list and plan to run another road 50k early 2019 for GB  selection.  From this point onwards my marathon time has improved from the previous year  ( looking half credible)and with the hope to get back into the 2hr 40’s by the end of this year.  Additionally, with my heavy training/racing the ACP 100k as part of Team England saw us win the team event and I also got reigned British Champion in a time of 7hrs 53.  Chuffed was an understatement after my long road to recovery and a 16-minute pb.  This win and time gained my selection for the World Championships in Croatia September 8th.  A busy year its been with me completing a 24hr in June to gain the selection standard for the World Championships 24hr next year.

The year isn’t quite over and I have bounced back from 2017, not let the illness ruin my future goals and I certainly listen to my body more for downtime and hopefully a few more Pb’s . Not that I am being greedy but I have worked my arse off ! 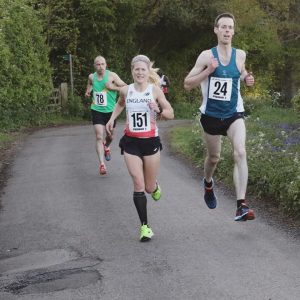