A lovely but short weekend away in Edinburgh.  GSI events once again organised race and great to catch up with a few running friends along the way also running the marathon.

This wasn’t originally on my race plan but after a windy marathon in Manchester thought it would be a good back up option whilst fit.  Unfortunately the wind that weekend was 40mph winds which initially for the first 14/15 miles out wasn’t too bad it really picked up on the climb and turn back.  Despite fueling and running well I started to go backwards and get pins and needles having been in 2nd place behind a Kenyan for almost the entire race.

What felt like staggering and dizzy spells I knew I had to get the finish line as quick as possible and watched 3rd lady pass me with a mile to go.  I still finished although disappointed third in one of my slowest times in the last 4 years, the wind was terrible.  I still picked up some prize money and pride still in tact. 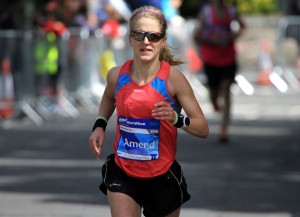