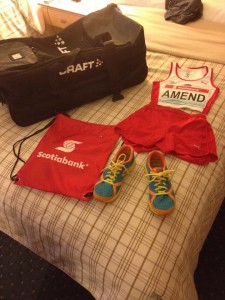 How exciting to be selected for England and have an opportunity to be able to run a marathon in such a great city.  I had never been to Canada and always fancied going but was offered Denmark last year and I had this in reserve if Berlin hadn’t worked out.  it was a long flight but had a great opportunity to meet the other 3 England team members from all parts of the country, Em Stepto, Kevin Skinner and Ben Fish.  the hotel when we arrived was some distance from the airport and we were met by the race organisers who also told us the hotel was being knocked down that Sunday??? – as you can imagine it was a little dated but regardless the rooms were comfortable and large and Em was a great team mate.  We were literally 1 second apart in London so I knew we had similar times also for 10k, half marathon.

Unfortunately though the only highlight for this trip was seeing Niagara falls because I ended up on race day still exhausted from Berlin 2 weeks before and with the torrential rain and also humid air I struggled from halfway with cramp and began to run poorly and declined also in the second half with so many out and backs and around cones it was less than ideal.  Also on 2 occasions threw up the sports gel which was too sweet and made me very sick.  To top it off at the end a  nice hill climb in the last 3k which by that time I had no energy for.  I ended up going through the finish in 11th position 2.48 which was a personal worst for me…  I am not sure what I expected after 2 weeks from another marathon but half hoped I could pull it off from the disappointment of Berlin.  Em my team mate run a PB just outside my own time and I think fresher legs and hadn’t raced a marathon since London so the sensible one out of the 2 of us.

Lesson Learnt and pep talk from Coach and Agent… “too many races” and way too soon for another one.  i couldn’t resist the temptation to crunch up the miles .  focus now is perfecting 2013 and get closer to a commonwealth time and train SMART!