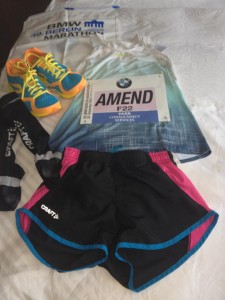 What started out as a good preparation to something that should have been a personal best turned out to be a battle of surviving injury.  For once I could truly say I had tapered for the marathon, completed some great sessions and in good form.  I was very well looked after by the Berlin Marathon team, hotel was fantastic and chauffeur service to and from the airport.   In hindsight I would have gone out a little later as the race preparation started too early from Thursday as did the anxiety and knowing what to do with myself.

Anyway race day came after an eventful few days at the hotel and the guests next door which turned out Kenyans playing music into the early hours I didn’t sleep much but regardless excited and raring to get at the start on the Sunday.  With 25 elite I knew I was one of the slower ones especially as I was with some of the top Kenyans and internationals including fellow Brit Sonia Samuels.  The start was mind blowing with 40,000+ runners and turning round to what looked like a never ending line of runners and then Men and women started on opposite sides of the funnels.  Weather was very humid and bright blazing sun for late September, was hopeful the wind would also cool me down.

So off we went on time at the speed of light with the Brandenburg gate behind us and what would be the last stretch to the finish.  I felt comfortable after the initial surge and got into a nice stride and for a while a speed bike with a camera in my face…  I saw at 3k the top Japanese athlete topped as one of the favorites pull out and felt relieved I was feeling good.  That was until at 5k some burly 6ft something  clipped my heels and I moved out the way crossly even through the roads were wide but winding round….  disaster then struck at just past the 8k when the same guy this time got me and took me off my feet landing pretty hard on the road and cutting my hip, arm, shoulder and knee.  Being down for about 20 + secs I couldn’t believe it, he didn’t even look back or help me up although in a surrounding group and I could only but get up and carry on.  So that’s what I did…..

In pain all the way and watching the car around half way go past me which I knew was the 2.40 pace car was gutting, it became a battle to just finish the race but I suffered and felt gutted to know this was one of the best courses and although windy the conditions were still better than London.

I struggled through and never wanted to see a finish more than that day, I felt lonely and about to burst into tears and all the emotions came at once.  I went through the finish line in 2hrs 45 and welled up with tears, just grateful I was going home that evening.  Met some amazing people and the opportunity to talk to the winners which was there day , just not meant to be my day.

I hope to go back to do battle again!