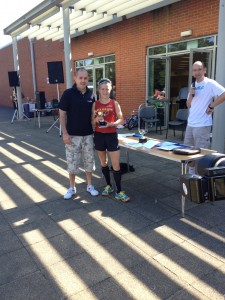 What started of as a lovely start to the morning, nice and calm with signs summer had finally arrived… with the the sun beating down in the car  John & I started to fear we may not actually  make the race (Renowned for leaving early to get to races, had done the same).  Arrived close to the venue arounf 7.45am with about 1.8 miles to go and then it turned into a nightmare of crawling cars, which we thought was to be the typical temporay traffic lights.  Some 35 minutes later and still about 0.85 of a mile left we realised runners started to abandon their cars due to the same worry we had.  What had caused this traffic?? We started to look for roads to abandon my car aswell and busting to go to the loo we decided to stick it out, great  relief  for me was finally seeing the left turn I needed.  So what held up the traffic????  ………..” A flipping  morning carboot” .  The race fortunately was delayed for 30 minutes due to this chaos and I was  finally able to warm up and prepared for a “Hot” run (of dourse with my millions of toilet stops).

Finally at 9.30am we were on our way……. I ran the 1st section quicker as it was road 4k  and the 5k in 17.36 and then finished 36.07 as the last part is on the tow path and very busy with dodging cyclists, walkers and a dusty surface.  tough with the sun beating down but I intended to run this comfortable after a half marathon the week before and nursing my achilies back to health.  Continued on form with my friend John for another few miles to round upto 15miles.